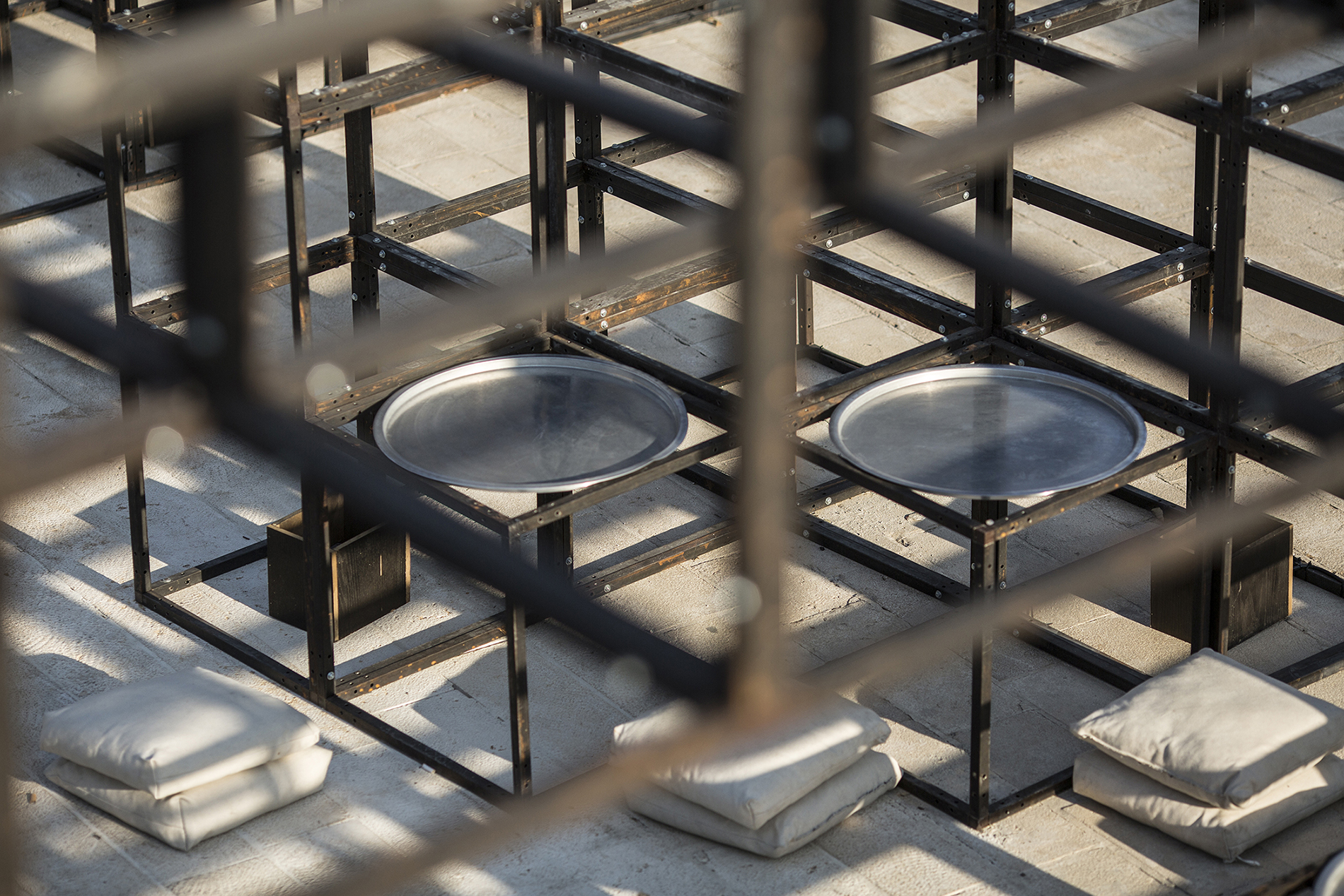 Madafa the Food and Culture Pavilion 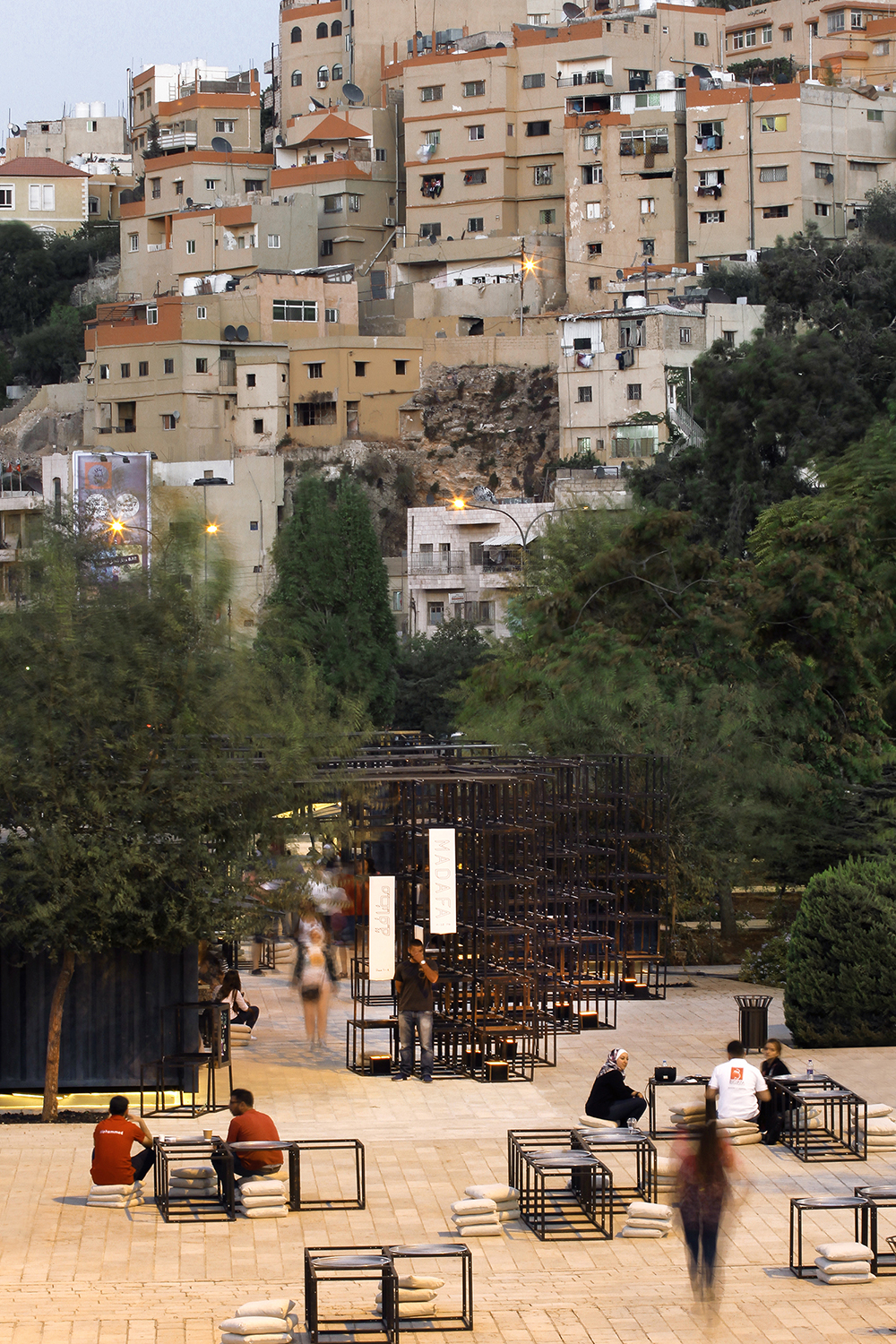 Set within the winding pathway between Al Hussein Cultural Center and Greater Amman Municipality MADAFA pavilion was developed for Amman Design Week 2016 to enhance the surrounding landscape and envisioned for being a spot of exposition.

The pavilion is a modern interpretation of the Madafa, a traditional Jordanian space that is built to entertain, host and feed the guests during their visits. The rich narrative of the Madafa inevitably encouraged users to explore parallels with contemporary architecture as it was created as place of gathering through hosting a series of cultural events and live music.

In all its parts, MADAFA encompassed a multi-layered sensorial experience, a welcoming place to rest, a place that allowed visitors to indulge in exclusively designed food, specialty dishes and gourmet snacks developed with food professionals and served in distinctive tray prototypes. 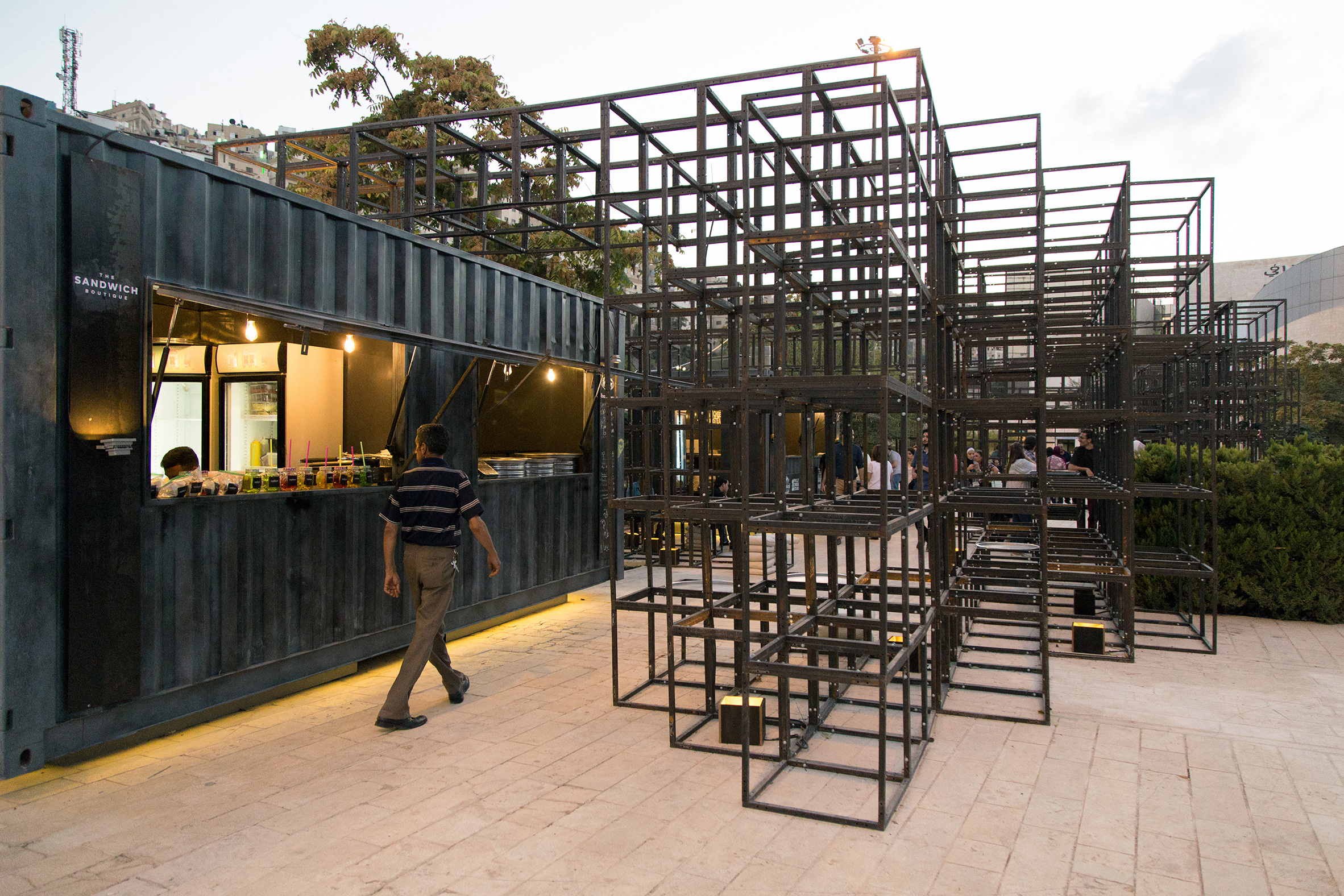 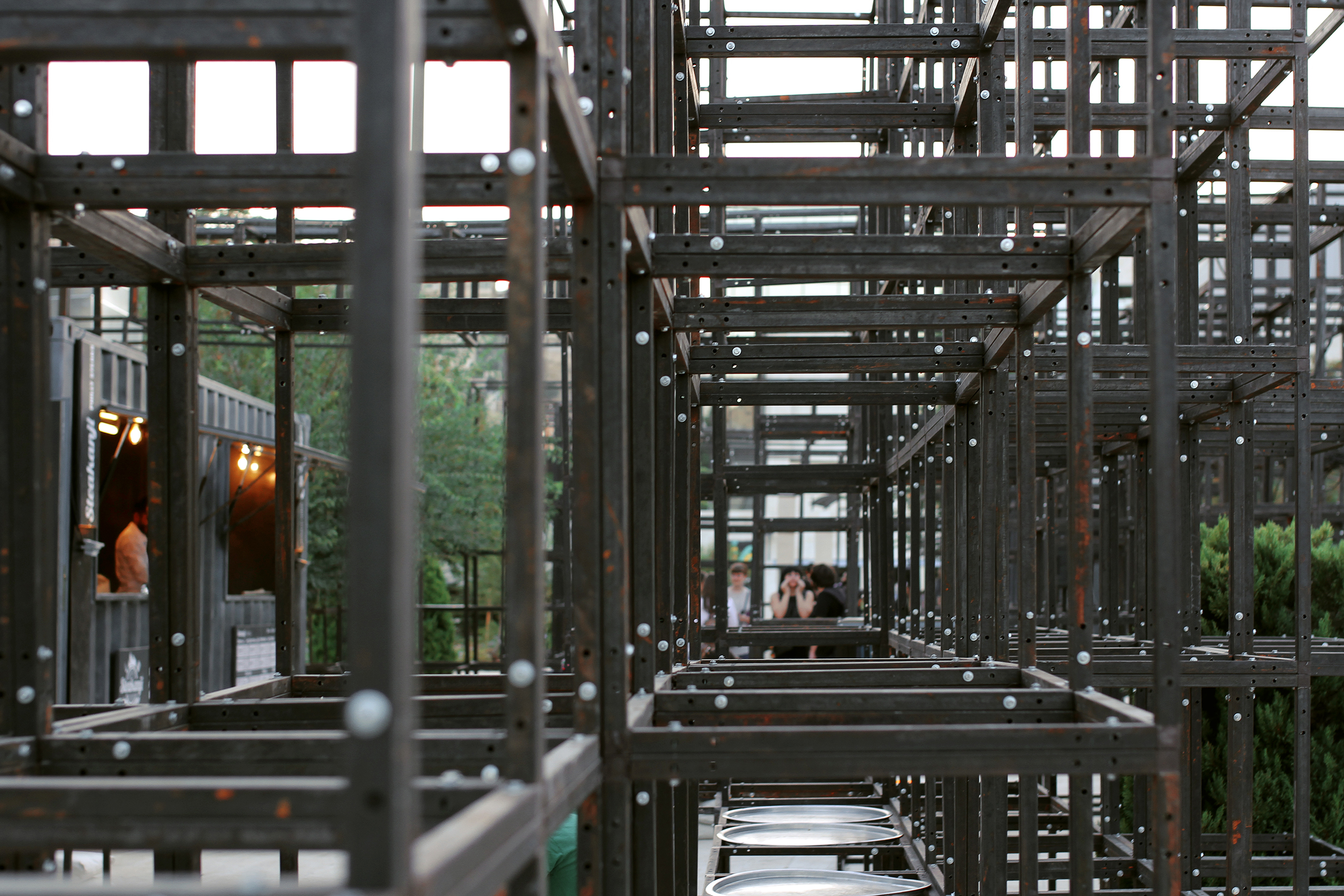 Encompassed within the MADAFA, three shipping containers were repurposed within the promenade to host a set of local restaurants and cafes. Standing free with all their sides visible, the containers are an integral part of a steel grid modular enclosure. Creating a presence in the pathway that changes as you move around it and through it, the pavilion became a scene set against the backdrop of Amman’s mountains

The grid modular system enclosure was built using weathered steel tubes and joints. The solution was implemented to showcase the beautiful backdrop which is the complex and layered mountains of Amman. The modular system also permitted the pavilion to be permeable while creating a definition for the space. The structure was made of 7 tons of steel, 1,020 steel cubes and 21,000 washers and screws. The pavilion was built in 6 days due to the special nature of the location.

Lightning and shadow played major part in the experiencing of MADAFA. At night visitors moved throughout the space as it fades into darkness due to the washed lighting effect which illuminated the lower surfaces. During the day, visitors enjoyed the dramatic and transformative play of shadows as the sun rendered different architectural patterns throughout the day.

Arini's approach to successful activism in design and urban development projects has enabled more than 30 economically vulnerable and marginalized youths and workers from different communities and tradespeople dwelling in the Downtown area while constructing MADAFA. 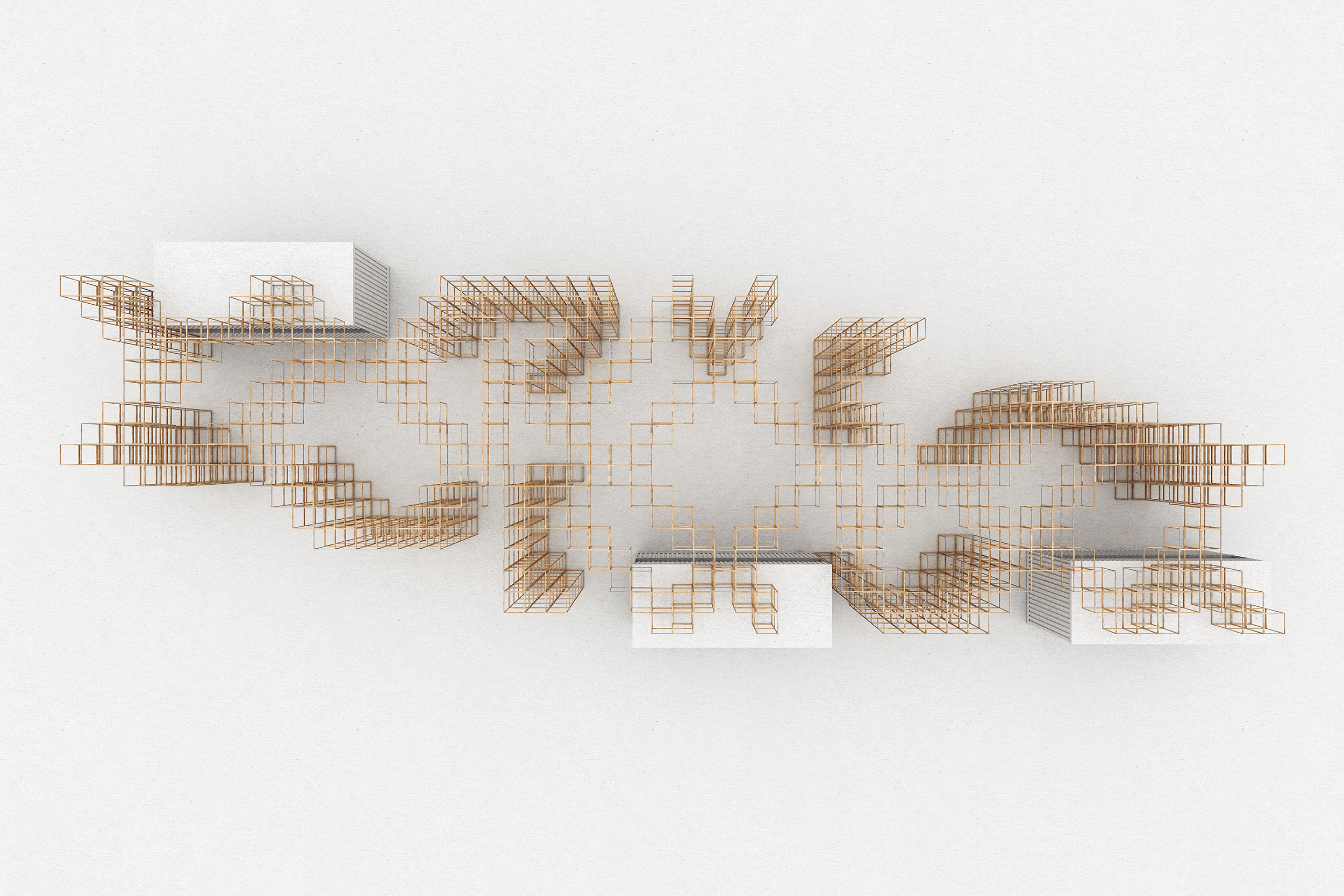 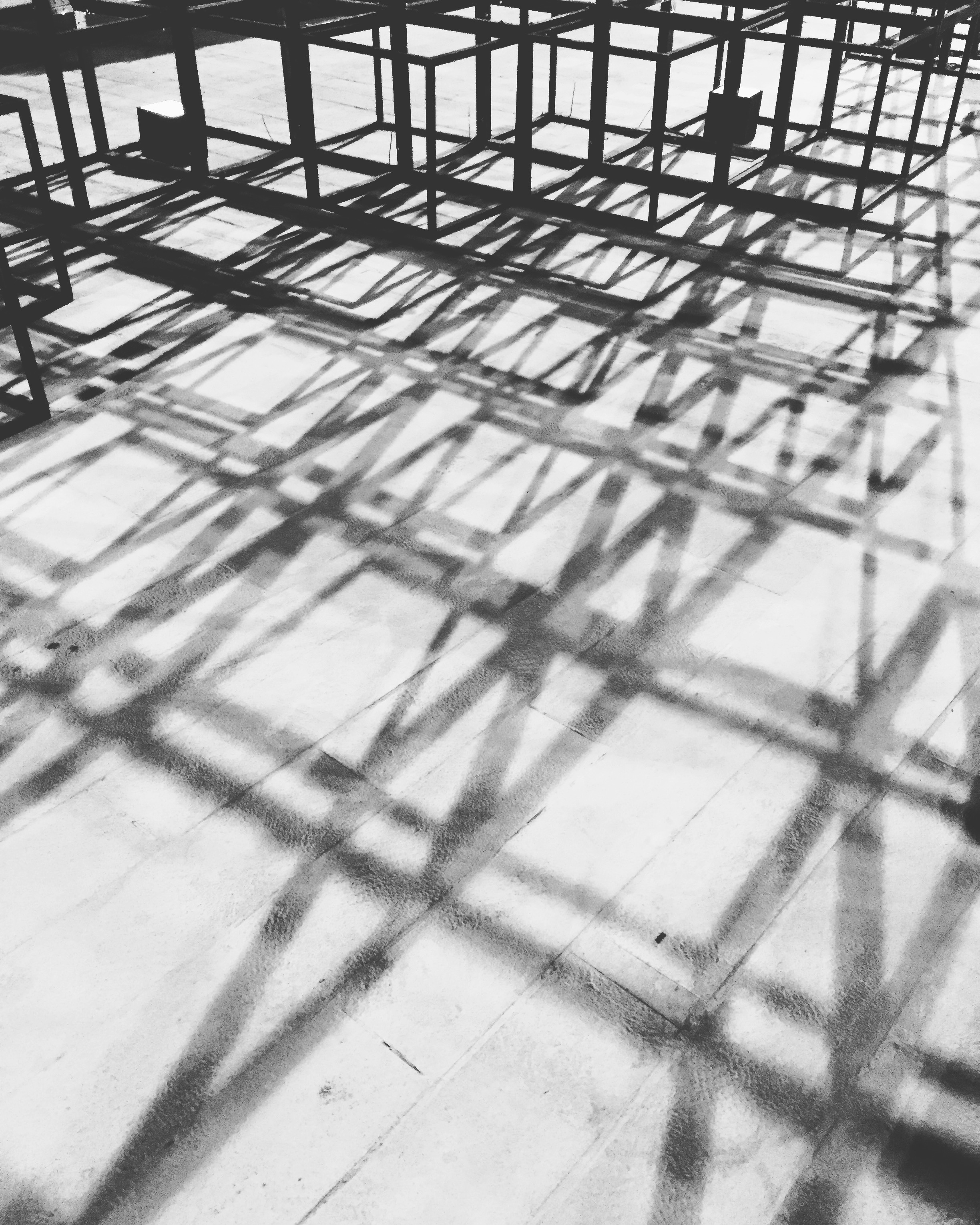 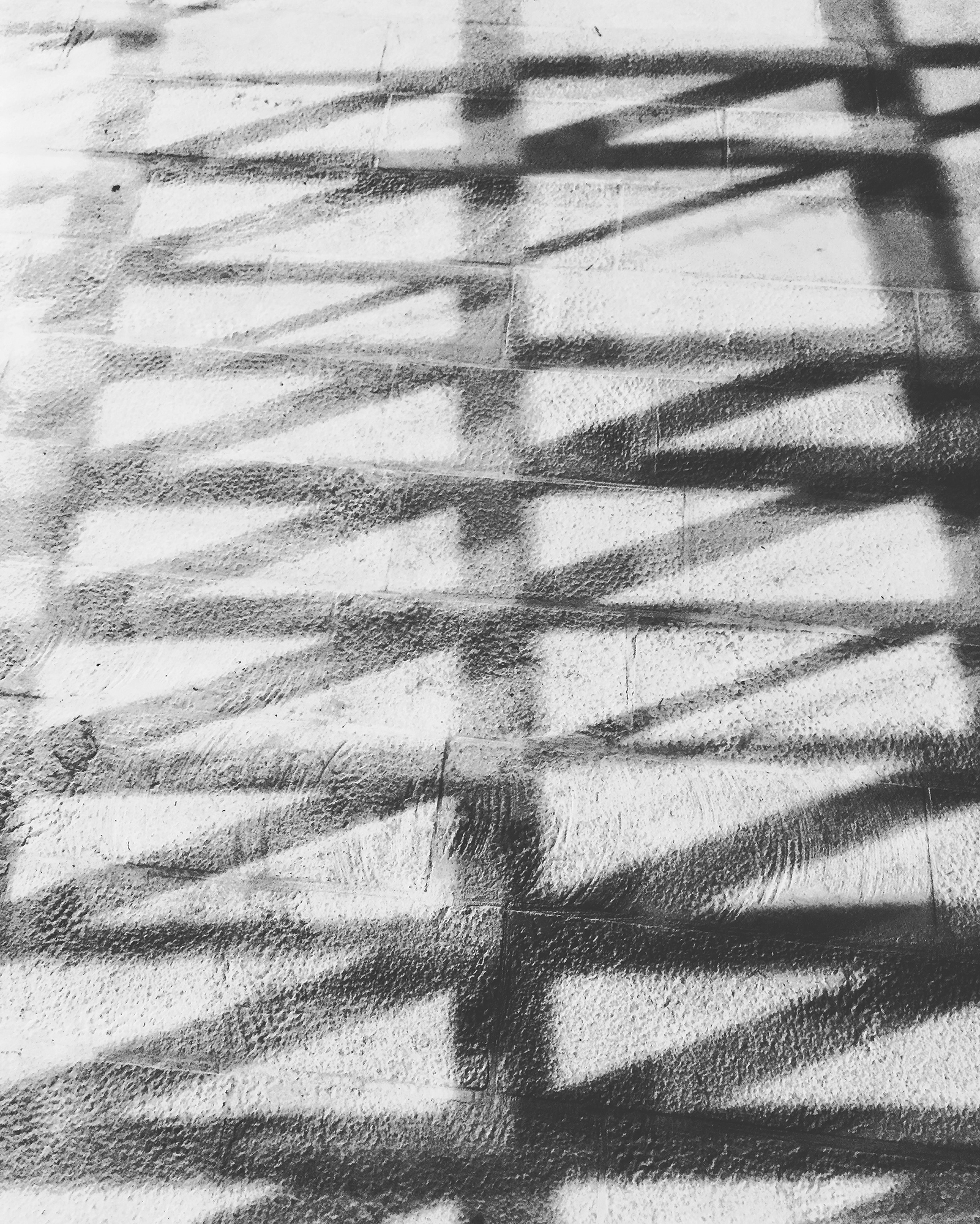 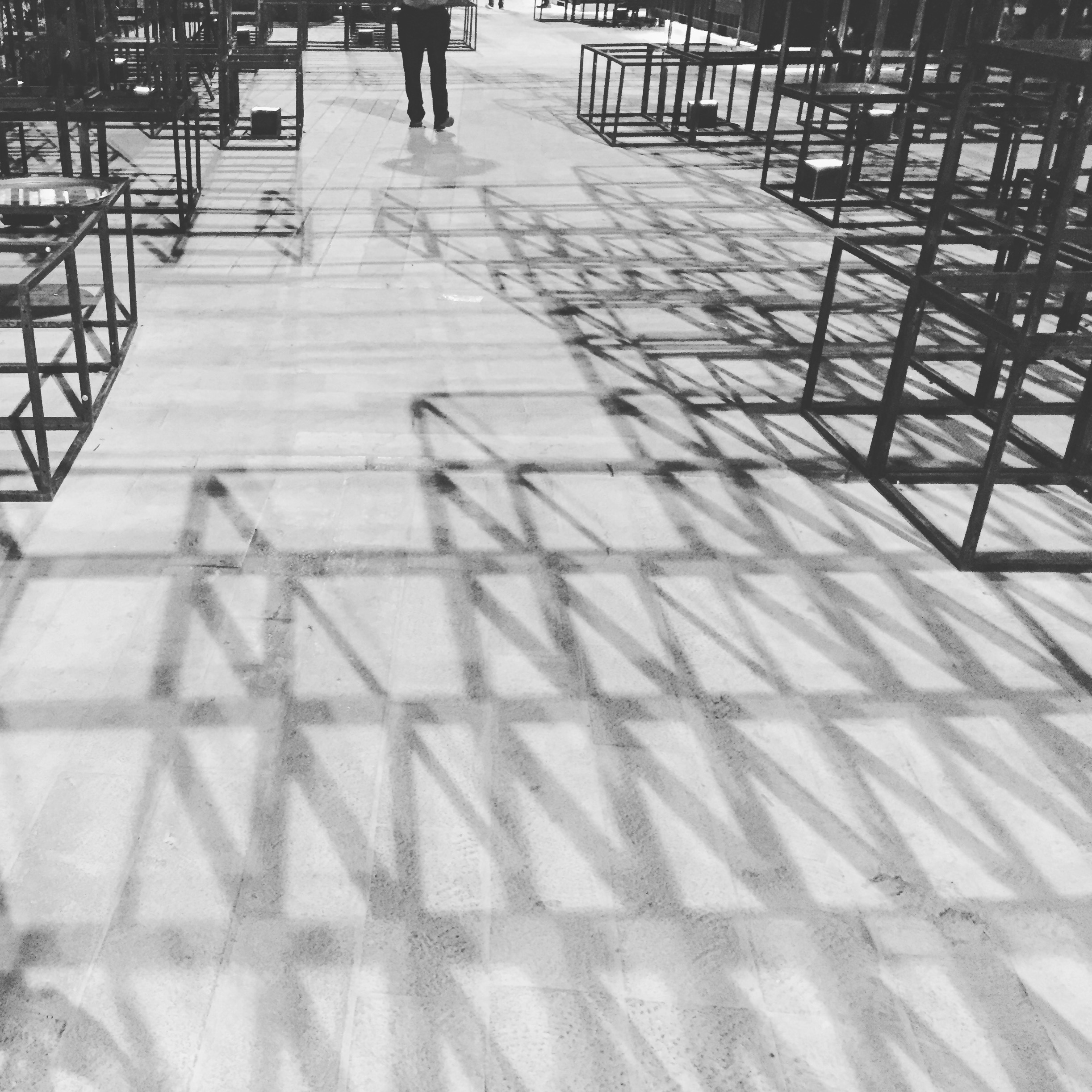 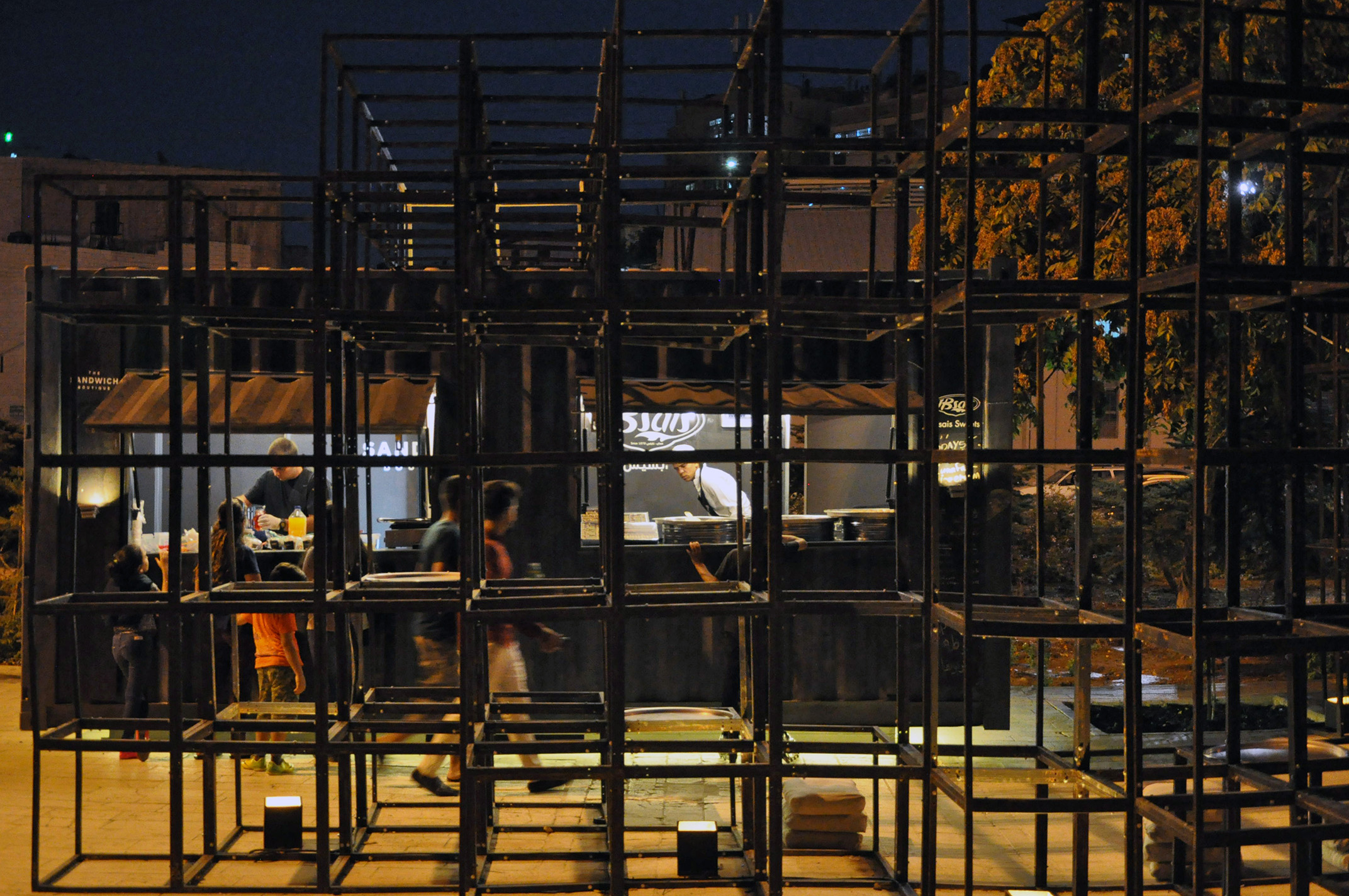 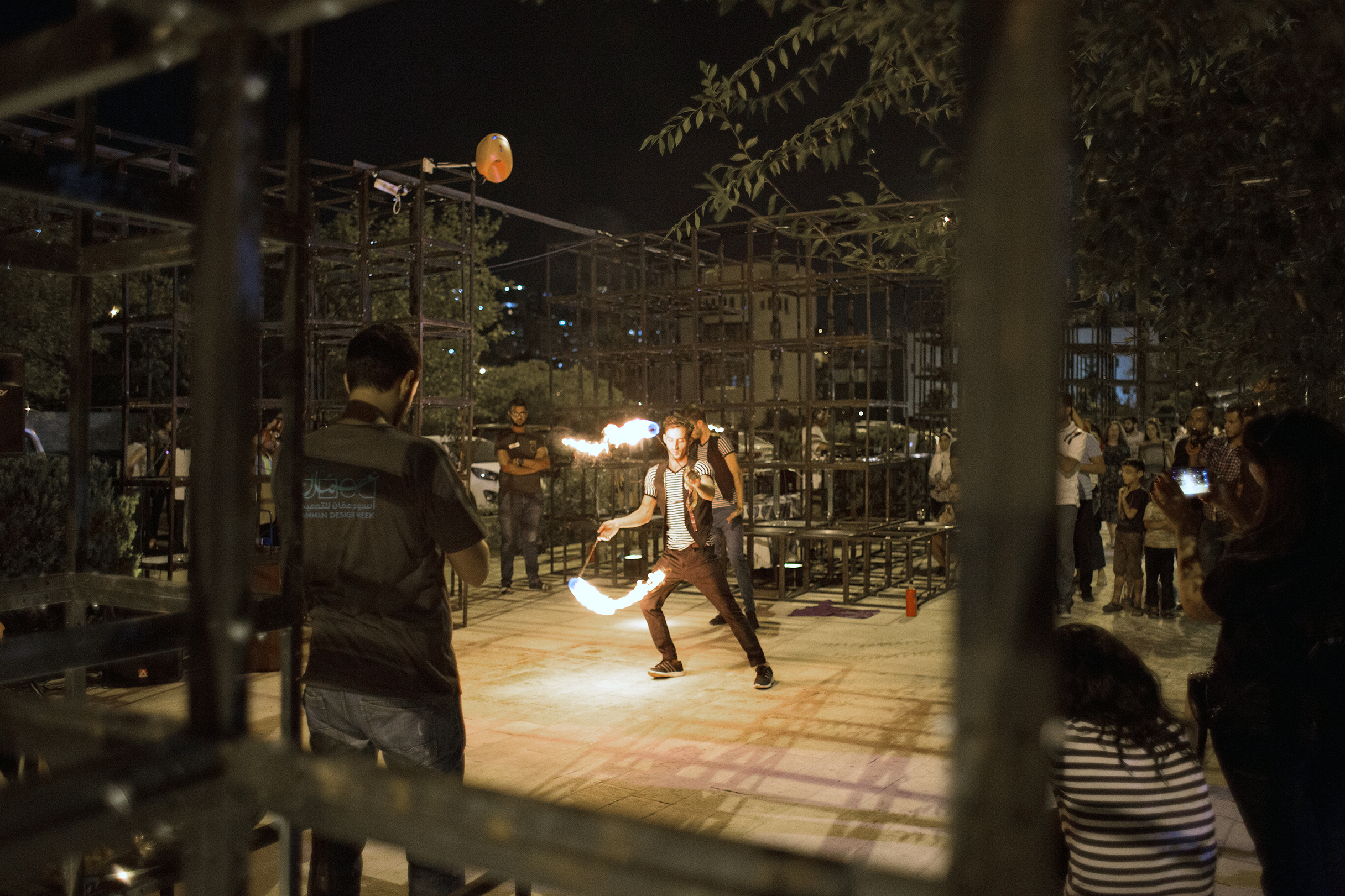 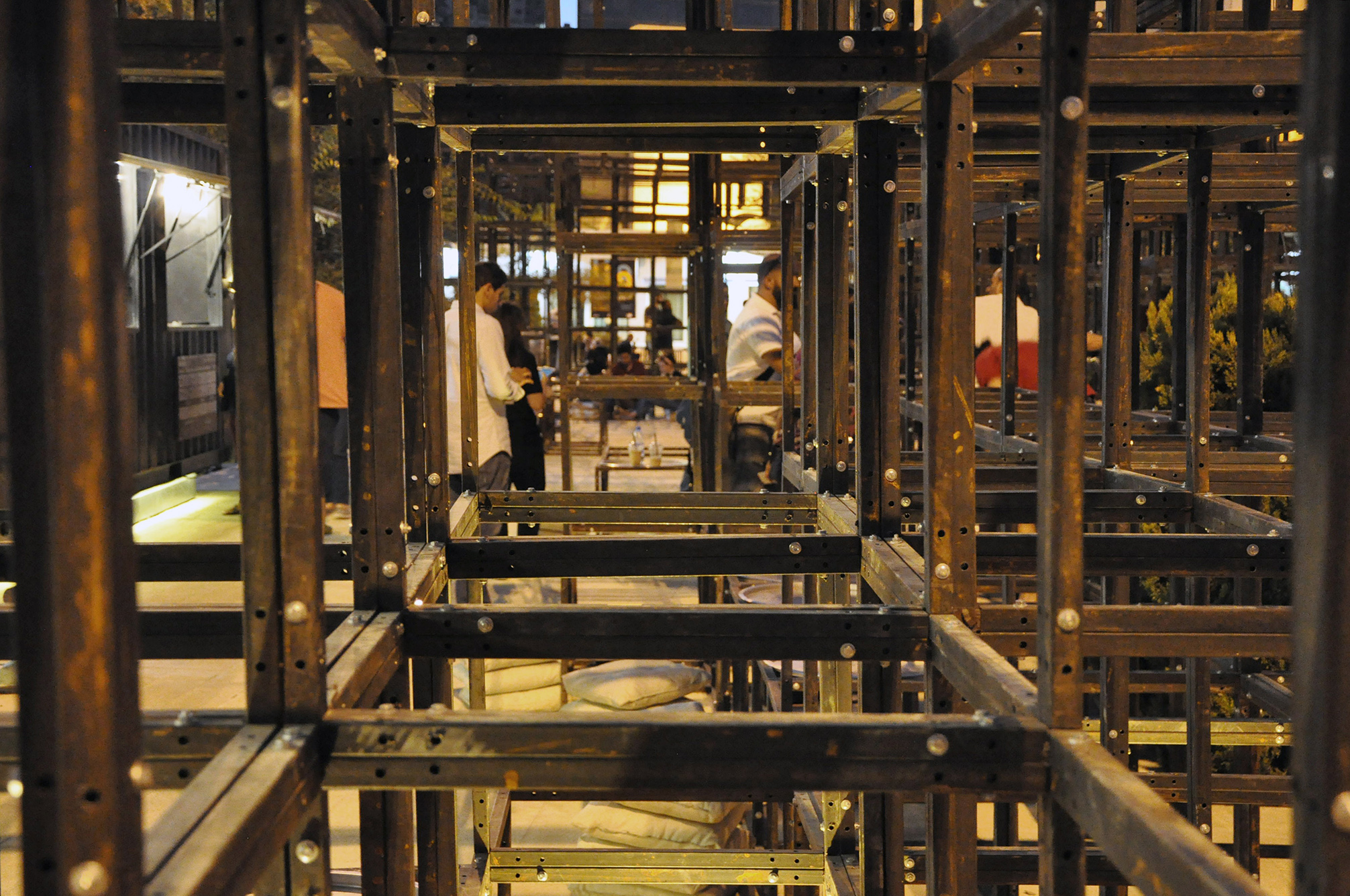 Rasem Kamal, an architect and a Fulbright fellow with a Master's degree in Architecture from the Rice School of Architecture. Kamal is currently working at the Basel studio of Oppenheim Architecture. Prior to that, he worked with several regional and international architectural firms including Symbiosis Designs, SOM and AS.Architecture-Studio in Paris.

Saja Nashashibi, Managing Partner and Principal Architect of Paradigm Design House, a collaboration of talented architects and designers whose main aim is to transform creative potentials brought by design opportunities into reality and the team works with clients through an integrated approach affecting the environment, local economies and community.

Amman Design Week aims to be an annual event that celebrates talent and experimentation with the intent of encouraging the growth and proliferation of the design sector in Jordan, in an environment that stimulates learning and innovation. Supported by Her Majesty Queen Rania Al Abdullah, Amman Design Week piloted in September 2016, creating a platform that will bolster Jordan’s design sector and move it toward international recognition and acknowledgment.